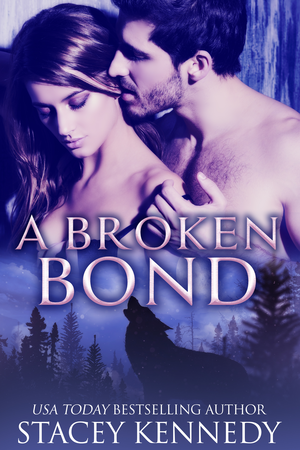 "A Broken Bond is a quick and hot novella, with a little danger, adventure and some steaming sex."
Bitten by Paranormal Romance

White noise ran across the radio waves. Cash swore, wiped the rain from his hands onto his worn, dark jeans, then turned the knob on the radio. Free Bird blared through the speakers of his ’69 jet black Camaro. He settled back into the leather seat, ran his hand through his dirty blond, textured hair and wiped away the moisture dripping onto his prominent nose and trickling down his sculpted cheek.

The visit with his sister, Taya, had gone better than expected. It’d been two years since he’d last seen her or the cubs. At twenty-eight, his twin was still a better human than he would ever be―too much wolf lived in his blood.

Taya was a perfect mother to her twin babes, Malik and Marlee, and mate to Royce―all of whom belonged to the Montana pack. Cooke City was their birthplace and where his family had been born and died. He was the only one of his blood relatives who had left, and would probably ever leave, the pack’s protection.

It shamed him to think that he had left his sister. With his parents long deceased, he was the last of his family ties. But rogue was more Cash’s taste.

He hadn’t belonged to a pack for two years and that suited him just fine.

Once a Montana pack member, he had been loyal and faithful to his Alpha, Blaine. Now, that allegiance had left him. Not on harsh terms, but nonetheless, he didn’t belong here anymore.

With a groan, he shook away the guilt of abandoning those who needed him and wiped the remaining droplets of rain off his face. He wouldn’t burden himself with guilt. There was enough weight on his heart as it was.

The death of his mate, Jaclyn, had been the reason he left the pack. His soul mate had been killed by a rare disease that took her life within days of the first sign of illness. When her heart had stopped beating, so had his.

Nothing lived in him anymore.

The scent of wolf reached Cash before the door to his car opened. Royce sank into the seat, drenched by the falling rain, and shut the door behind him. “We have to talk,” he said, gruffly.

Cash respected Royce as much as he would a brother. More than once they’d fought side by side and rejoiced in victory together. Now, as he met Royce’s firm hazel gaze, he was aware he was not his equal. “Say what you have to then,” Cash responded curtly.

Royce’s eyelids sank to slits as pure contempt washed across his naturally soft features. “You’re a real selfish bloke, you know that?”

“Do you know the pain you have caused your sister?”

Cash shut his eyes. He didn’t want to be reminded. “What do you want, Royce? I’ve not come here to be made to feel guilty.”

You have a family here―responsibilities, obligations to your pack. You cannot continue to run away from your problems.”

Cash snapped his eyes open and glared at Royce. “There is nothing here for me anymore. No reason to stay.”

Royce nearly shot out of his seat, full of anger. “I’ve got three reasons.”

He pointed back to the simple red brick home. “Right fucking in there.”

Cash gulped. His heart wrenched at the thought of either his sister or the cubs missing him. Wolves were bound deeper than humans. He’d felt his twin’s loss deeply, but compared to his own despair, it never measured up.

“Bullshit,” Royce snapped adamantly. “You’ve had a rough go of things since the death of Jaclyn. We all understand this, Cash. It’s why we’ve stayed away for so long and haven’t come searching for you. Taya thought your return tonight meant you had reconciled whatever you needed to and that you were coming back.” His expression darkened, his voice a near snarl. “But no, you came to only show that you were alive. Which, by the way, you left us all to wonder about.”

“I…” Cash hesitated, searching for words. After a long pause, he said, “I needed to see them.”

“Good for fucking you.” Royce bashed his fist against the dash. “Now, you’ve re-opened a wound. Taya considers you dead, do you know that?”

Cash closed his eyes, and gulped deeply. It pained him to hear his twin had to resort to such thoughts. “No, I didn’t know that.”

“She had to or she can’t get through her days. When you left after the funeral, it took Taya a month to recover.” Royce bashed his hands against the dash again, harder this time, and his fist left a small ding in the plastic. “A fucking month!” He pointed a finger in Cash’s face, his gaze firm and livid.

“You may have felt that the world fell apart, but you were not the only one―Taya’s world crumbled, too.”

Cash tore his gaze from Royce’s. He couldn’t even look at the man.

“You have changed. That is undeniable. This coward I see before me resembles nothing of the Cash I once knew.” Royce’s voice shook with rage.

His body trembled in his seat. “What is it you are looking for? Why do you run from your pain? When it is the ones here who could help you―your sister, your pack.”

“I have no pack,” Cash growled.

Royce’s breath hitched, the anger evaporated, and his tone came soft in a whisper. “If that was heard by others, hearts would break.”

Cash glanced up and stared at the man who he once considered a friend.

“I live only for Jaclyn, because she would ask this much of me. The only reason my heart still beats is I fear I will disappoint her if I join her. There is nothing left in me to give. My presence would only create despair and hardship. I say again, I am no good.” Royce’s gaze swept with emotions he’d never seen before. He had to wonder what showed in his eyes in that moment. He suspected they showed as dead as he felt inside. “Tonight, I came here hoping I’d feel something being around Taya and the cubs.” He let the coldness, the emptiness in his heart, rise to his face. “I felt nothing.

No warmth. No yearning to be back here.”

Royce frowned. “So you care nothing for them?”

“I am unable of caring for anything.”

Royce sighed deeply and the tension surrounding him softened. “If this is all true, which I have no doubt it is, you are right―you must go.” He reached up and put his hand on Cash’s shoulder. “Don’t come back. Never step foot

in this territory again unless you come home restored. I will not let you continue to ruin Taya. As her mate, I must protect her from that.”

Cash nodded as words escaped him.

Royce opened his door and began to climb out, but stopped to glance back. “Find whatever it is you are looking for, find a reason to live again, and then, Cash, come home.”

When the door slammed shut, Cash’s breath wheezed out as if he hadn’t breathed in a lifetime. He glanced out to the rain pouring down his side window and saw Taya standing at the door just under the sconce. Head full of curls, round rosy cheeks, and the kindest brown eyes he’d ever seen. Yes, this was home―but he didn’t belong here anymore, and he didn’t think he ever would.