BOUGHT BY THE BOSS

What’s better than one bad-boy boss? How about two?

In a duet of naughty novellas, a charity date auction turns into all-out war when a pair of powerful corporate lawyers each buy the other’s assistant for a weekend of seduction.

I’ve wanted Aria Finley from the moment I met her. We flirt, we laugh, we connect. It could be perfect. She’s even best friends with my assistant. Problem is, she works for my archnemesis—Jackson Keller—and she’s the kind of girl who stays loyal unless you give her a reason not to. Besides my hard-on there’s something hot between us, and I won’t rest until I put my finger on it. So when I get the chance to buy Aria for the weekend at a charity auction, there’s no limit. I’m going to take her home and take what I want because I’ll make her want it too. And by Monday, she’ll know she’s mine.

Liam Maxwell thinks he can get to me through my assistant, Aria. Well, two can play that game. Now Mallory Beckett—Liam’s assistant and Aria’s best friend—is mine for the weekend. Only she has no idea who bought her at the charity auction. This is going to be worth every penny. But soon I realize that Mallory has been waiting for my touch all along. What starts as a fling turns into something more. From the beginning, I was so focused on stealing her away. I never thought about the fact that I’d drown if I lost her. Now the game has changed. And she needs to know that she belongs to me.

"A sexy set of romances that not only make you want to turn the next page but to reach for a glass of water at the same time.” 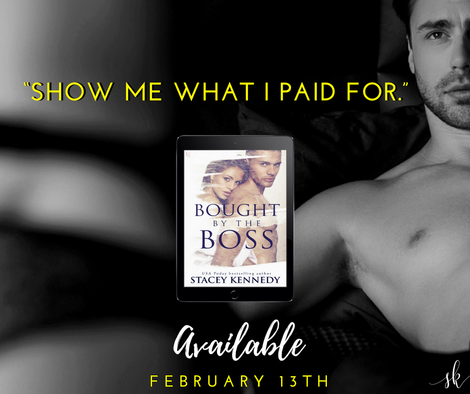 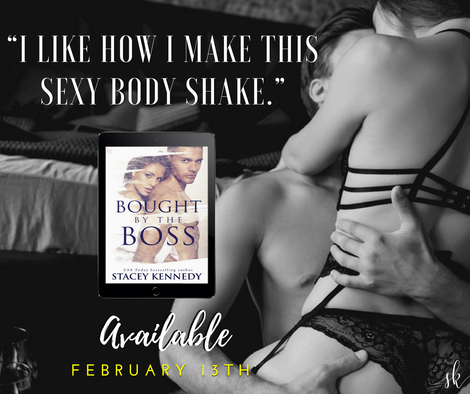 She’s all legs and innocence. And I want those legs wrapped around my shoulders while I drive into her.

“One hundred thousand dollars,” I call out. Audible gasps come from the crowd sitting around the white linen–covered tables.

There is no price I won’t pay for Aria Finley.

In the grand ballroom of the Ritz-Carlton hotel, the rich and famous have come out tonight in support of the Los Angeles Pediatric Hospital. Though the one person here tonight holding my attention is her.

Aria stands upon the stage, a stunning brunette wearing a fitted black dress. Her intelligent blue eyes are fixed on me, seemingly completely unsurprised that I went from zero to a hundred thousand dollars for her. Though I’m not surprised by that either. She’d likely anticipated when she entered the charity auction that I would not only bid on her for a weekend date but that I would win.

Because that’s what I do. I win.

By the slight curve of her mouth, I assume she wants me to outbid the competition.

I sip the scotch from my glass, savoring the burn in the back of my mouth before placing the glass down. Crystal chandeliers hang from the ceiling, casting a warm romantic glow over the crowd. Every pair of eyes is pinned on me, most in attendance are sitting at the edge of their seats in anticipation.

“Going once,” the auctioneer says. “Going twice.” She drops the hammer down on the podium, indicating the sale is complete. “Sold for one hundred thousand dollars. Congratulations go to Mr. Maxwell in the back.”

Rounds of applause and piercing whistles follow, likely more in support of the large donation I made to the hospital than the fact that I’ve won the date with Aria this weekend.

I lift my glass to Aria and arch a single eyebrow. My gesture isn’t an acknowledgment of our arrangement but a promise that this will be a weekend she’ll never forget. Her sexy smile in response twitches my cock, reminding me that she’s worth every damn penny I spent tonight.

Over the course of three years, I’ve jerked off too many times, imagining her pouty lips sliding up and down my dick, those bright, intelligent eyes of hers on mine. I curse at the tightness of my pants, shifting against my seat, my cock far too eager to wait any longer. When I blow inside Aria the first time, I’m going to make it goddamn memorable.

I smile at the raw anger in the low voice before turning toward my competition in the game of corporate law, Jackson Keller. Where my feautres are dark, his are light. His stormy green eyes are narrowed on my face, features tight, matching the hardness of the gel spiking his dirty-blond hair. Our builds are similar, muscular and fit, and I imagine if we fought it’d be an evenly matched fight. His suit is impeccable, showing his excessive wealth. I should know, we use the same tailor. There’s more between us than my winning a date with his assistant. We were once friends. Roommates in law school, in fact. Until Sophia Flynn.

Our friendship had been the price.

“Is there a problem?” I ask smoothly.

“Do you really want to play this game, Liam?” he growls through clenched teeth.

I arch a brow, leaning back against my chair, staying perfectly calm, which I know will annoy him. “I’m here to support a good cause. That’s what this is.”

“Bullshit.” He slams a hand down against the table, leaning in closer toward me. “You only bought Aria to get at me. You have no business going anywhere near her.”

I take a quick look around, noticing people are glancing in our direction now. I frown, not wanting any attention. “You’re wrong.” I meet his fiery gaze. “My buying Aria tonight has absolutely nothing to do with you.” Much to my dismay, I had to go this route because of Aria’s loyalty to Jackson. As opposing corporate lawyers, we often end up in meetings together. Meetings where Aria is there, too. From day one, for three goddamn years, I have wanted to get her beneath me. Maybe at first the attraction came from her being Jackson’s assistant. Perhaps I wanted to take something from him like he took something from me. Though over the years, my vengeance lessened and my interest became all about Aria.

She’s walking seduction. And I will fuck her until we’re both exhausted. “I bought Aria because she’s a lovely woman, and I’ll enjoy spending the weekend with her,” I clarify, swirling the ice in my glass. “You know my interest in her is not new. You also know that the interest is reciprocated.”

My back straightens like a steel rod. “You think Aria belongs to you?”

“Stop it right now, the both of you.”

I glance in the direction of the soft voice, finding Aria standing off to the side of the table, arms crossed. Heat rips through me just that easily. I rise, not only to greet her but to ease the tightness of my pants around my hardening cock. That’s what she does to me. She makes me fucking crazy. “The problem herein lies with Jackson, not I,” I explain.

She purses her lips, shaking her head at me. “Though I’m sure that attitude isn’t helping the situation any.”

I grin in response.

Jackson scowls at me but when he addresses Aria, his expression softens, the tension he showed me now gone. “He’s doing this to get to me, Aria. I will not allow him to use you.”

It’s clear Jackson cares for her. I know him. There’s not lust in his eyes when he looks at Aria, but a protective brotherly type of affection. Perhaps that’s why he wants me to stay away from her. I can only guess he thinks I will hurt her. I wouldn’t even doubt that he has been feeding those lies into her mind when she originally showed interest in me, but my wanting to hurt her is so far from the truth. I want to give this special woman everything I have. Then I want to give her even more. And by the time this weekend is over, she’ll know that she’s mine.

I keep the thought to myself, not wanting to antagonize Jackson with Aria here, when she says, “No one will be using me for anything, let’s just get that clear, all right?” She draws in a deep breath, and like I’ve seen her do many times, she spectacularly owns the moment. “We are supporting the hospital tonight. So what is going to happen here is we’re going to behave like grown-ups and know that this is only a weekend date, not a marriage proposal.”

Jackson’s lips part, and Aria says firmer, “I am a grown woman who can make her own decisions. I will—and can—handle myself, thank you very much.” His lips part again. I smile. She narrows her eyes at the both of us. “Now, Jackson, go sit back down at your table.” She turns to me and adds, “You can really stop enjoying this so much.”

“Oh, but I am enjoying this,” I tell her seriously. Watching her handle Jackson, a cutthroat corporate lawyer, has always been the reason I’ve been attracted to her, aside from her sensuality and beauty. This woman is fierce. And I fucking love it.

Jackson scowls at me then says to Aria, “Be careful. He will hurt you, only so it hurts me.”

I see the way those words affect her. Her shoulders tense and brows pull together. It’s clear she believes what Jackson tells her. I hate him as much for that as for how much of an asshole he is.

“Just go,” she says softly, glancing around at the crowd. “We have an audience. I’ll be fine. I can take of myself. Promise.”

Jackson draws in a deep breath before addressing me. “You hurt her, and I’ll fucking make you bleed.”

Without another word, he’s striding away, back to his table. It’s a threat that I’d love for him to follow through on. One hit and I would flatten him in a second. I’d hit Jackson once. The day I found him with Sophia. After that day, I swore I’d never waste energy hating him like I had that day. But one hit, and I’d allow that anger for him I had buried away to return with a vengeance.

“You shouldn’t have done this.”

I turn toward Aria’s soft voice, finding her piercing eyes on me. “Shouldn’t have done what?”

She’s missing the point but I plan to correct her.

I finish my scotch and move in closer, watching the way her eyes darken with lust. She wants me, I’ve always known that. “You’ve given me no other choice but to go about it this way.”

She holds my stare. “I will never pick you over Jackson.”

I ignore what she’s said, staying on task. I’ve heard that same thing from her time and time again. “I don’t want you to pick me.” At least not yet. One step at a time. “I want to fuck you,” I tell her bluntly, mesmerized by the way her eyes heat, cheeks flush with long denied lust. I know her answer before I ask it but I ask anyway, “Will you refuse me what I want this weekend?”

Her eyes search mine, voice grows raspy. “You know I won’t.”

I smile slowly, showing her that I’m liking my prize already. “And that, Aria, is exactly why I did this.” I shift to the side slightly and press my erection against her thigh, showing her how much I want her. Her lips part, an invitation for me to kiss her, when I add, “I’m going to fuck you soft and slow, and then I’m going to fuck you hard and fast, punishing you for how long you’ve made me wait for you.”

“And then?” she whispers.

I bring my mouth close to her ear and promise, “I’m going to fuck you again.”