It’s cover reveal day for SASSY BLONDE, the first book in the Three Chicks Brewery series. I AM SO IN LOVE WITH THIS COVER!!! It’s so perfect!! *dreamy sigh* What do you think? 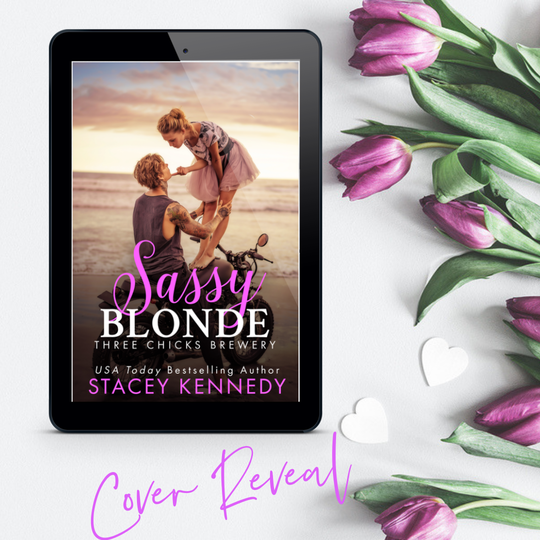 From USA Today Bestselling author, Stacey Kennedy comes a brand-new series, featuring a moody hero with too much baggage, a spirited heroine who is always game for adventure, and a sexy-as-hell road trip that involves an X-rated version of “I’m going to Colorado…”

As the youngest Carter sister, Maisie is the free spirit of the Three Chicks Brewery, preferring to paint nature and have fun than actually show up to work. But she’s determined to prove to her older sisters that she can be just as valuable to their grandfather’s beer legacy as they are. Which means attending Colorado’s craft brewery festivals to turn Foxy Diva, their top beer, into an award winner. Unfortunately, after more than one “beer mishap” on her own, it becomes clear to Maisie that she’s going to need some help.

Enter her longtime friend, Hayes Taylor, a six-foot-three wall of hard muscle with a chip on his shoulder and a traumatic past he has no interest in working through. The last thing he needs is a woman in his life, particularly his dead wife’s best friend, the sweet-as-pie Maisie, who brings out all his protective instincts. This damsel-in-distress couldn’t be more Hayes’s opposite, and yet, no matter how hard he tries to stay away, the cute and lively Maisie is always in his path, tempting him to want things he shouldn’t.

When the two embark on a brewery festival tour, all bets are off when it comes to Hayes keeping his walls up, and Maisie feels certain she can bring her darkly brooding best friend back into the world of love and light. Hayes might have a thousand reasons to maintain his distance, but Maisie has the best reason of all for them risk their friendship and their hearts. Love.