MEET ME UNDER THE MISTLETOE

A Prequel in the Three Chicks Brewery Series

Penelope Carter has won the “wild child” award for years. Determined to bring joy instead of irritation over the holidays, she’s arrived at River Rock to stay at her cousins brewery during the holidays, ready to earn her way off the naughty list. But when a few too many Christmas cocktails and a devilishly sexy cop from her past derail her plans, the nice list looks unreachable.

The last time Darryl Wilson saw Penelope, he was seventeen years old and had given her a hot first kiss. Ten years later, Penelope is a sweet distraction after his divorce, but she’s also the sexiest trouble he’s ever known. And when she becomes his trouble during the Christmas festivities that are meant to lead to his long-awaited promotion, he realizes that Christmas is about to get complicated.

But holiday wishes are sweeping through the snowy small town in Colorado, and if Darryl and Penelope survive the season, they’ll see a little bit naughty is more than a little bit nice. And this Christmas might be the best one of all. 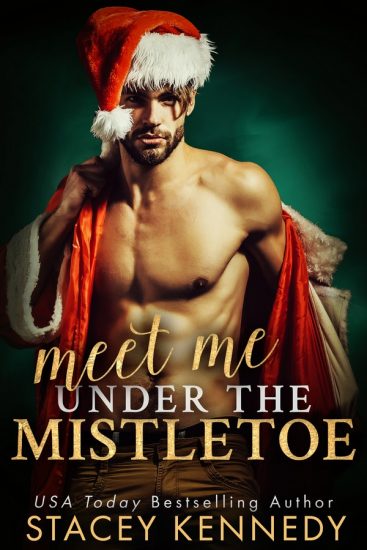 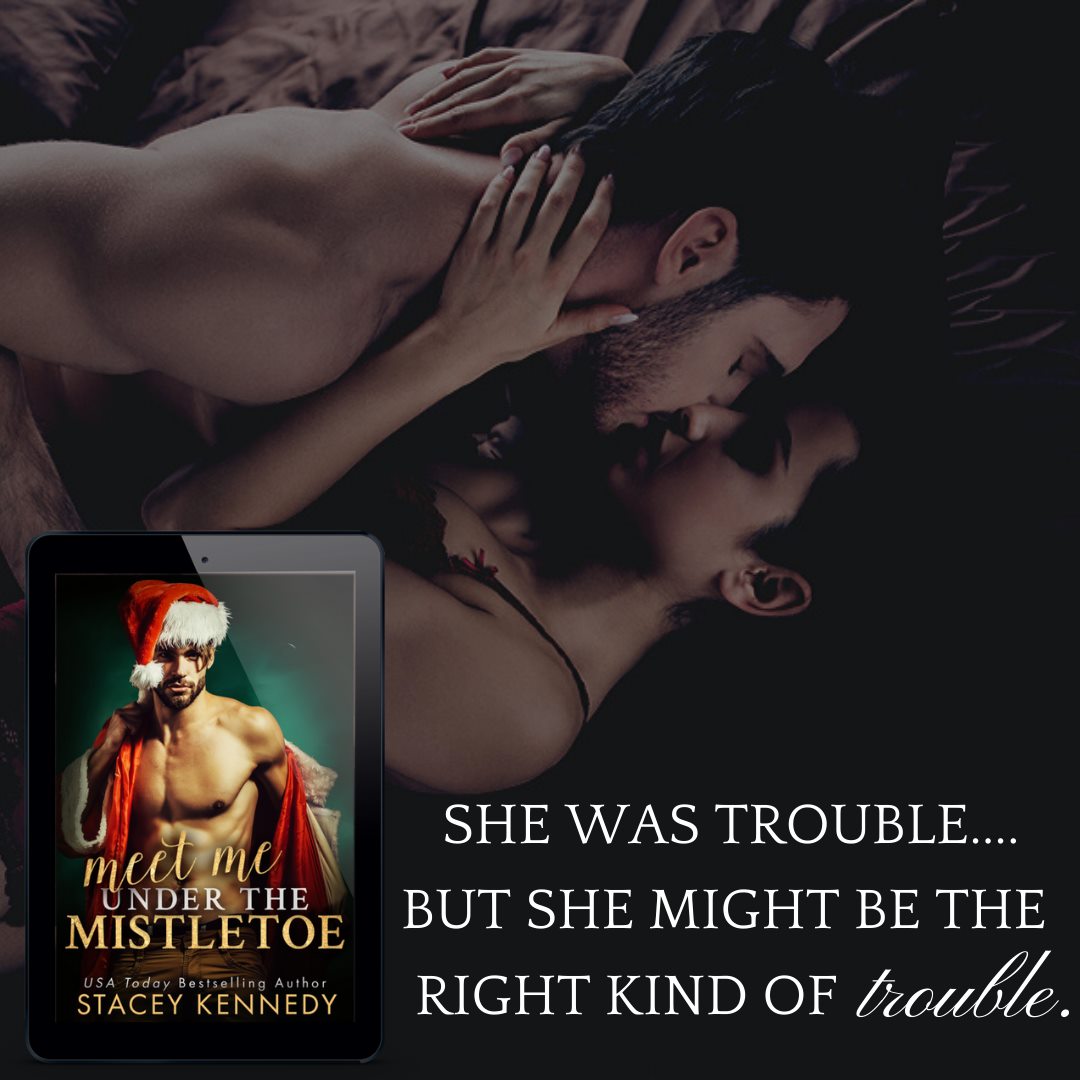 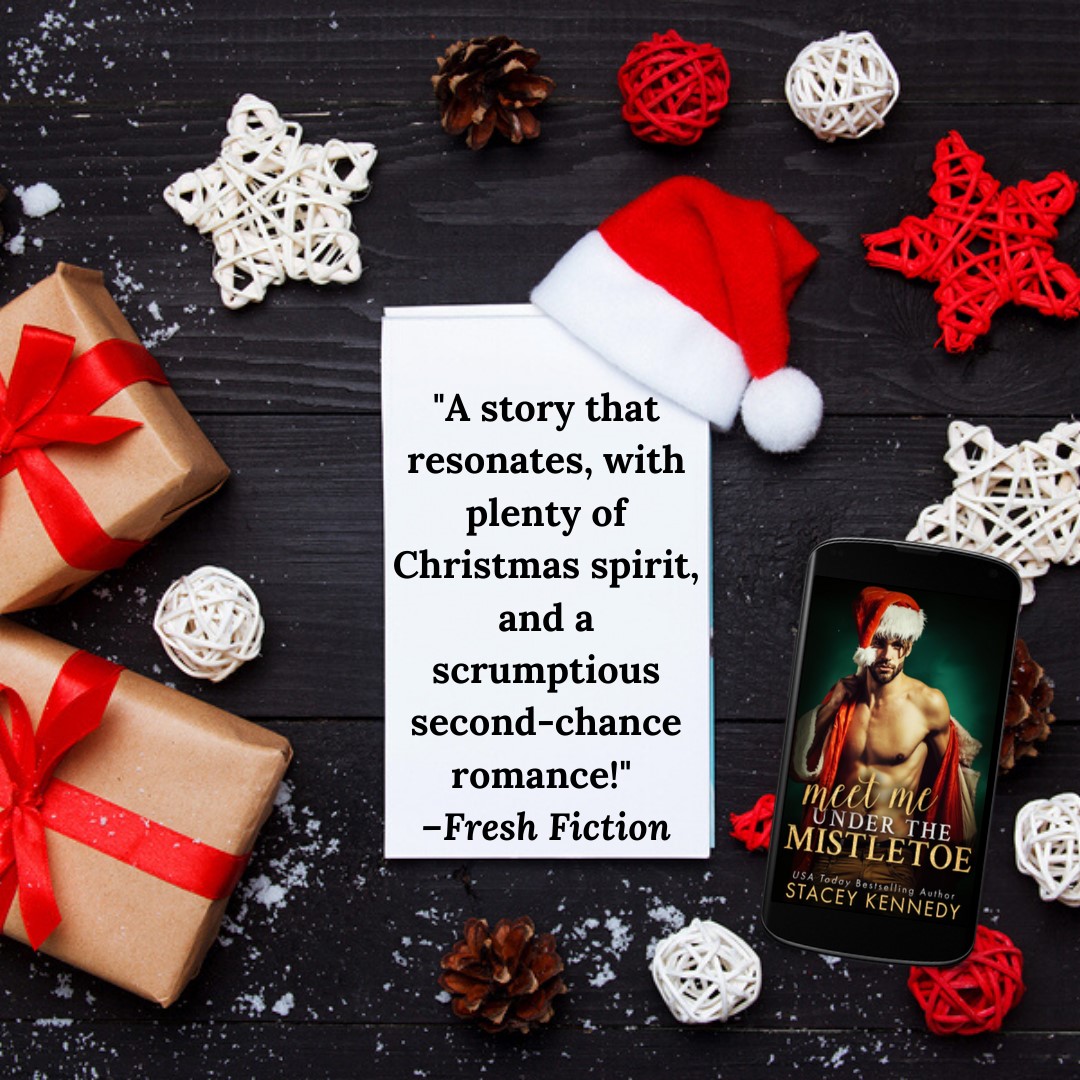 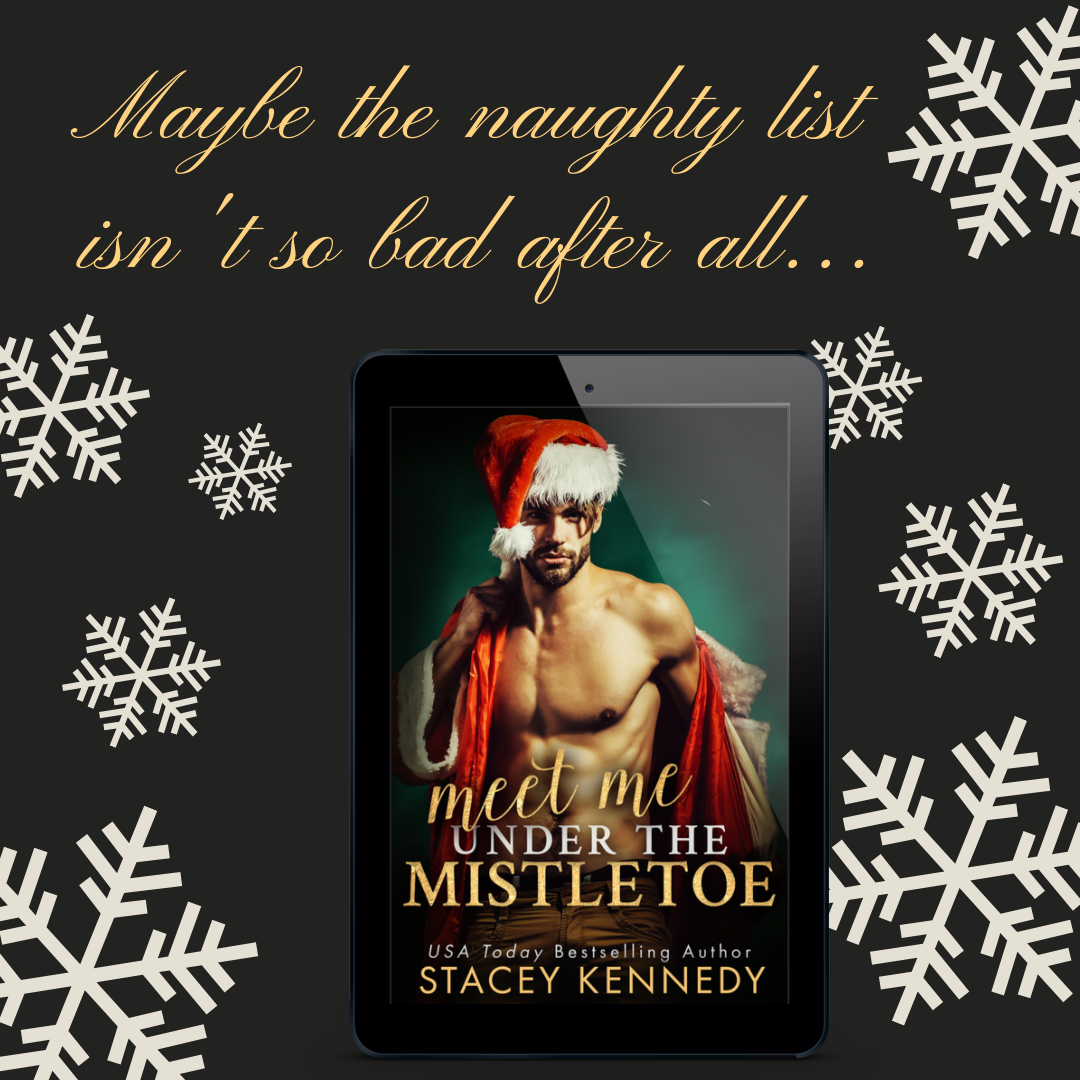 "MEET ME UNDER THE MISTLETOE has a story that resonates, with plenty of Christmas spirit, and a scrumptious second-chance romance."
Fresh Fiction

“He knows if you’ve been bad or good…” the long-haired brunette with the sparkling green eyes sang.

These days, not much gathered a crowd large enough to warrant a call to 911, but tonight was definitely not an ordinary night. The wrought-iron streetlights beamed soft light down on the sidewalk along River Rock’s historic Main Street, revealing large snowflakes fluttering down as Officer Darryl Wilson strode up to the large fountain in the center of town. The small town nestled into the Colorado mountains saw less crime than Disneyland on any given day. There hadn’t been a murder in River Rock since sometime in the 1970s, and most crime was either teenagers stirring up trouble, shady businessmen, domestic disputes, or more likely, drunk tourists getting into shenanigans. This time, just before eleven o’clock at night, the trouble was an intoxicated woman skating on the fountain in her high heels. And as he stepped closer, Darryl couldn’t believe his eyes.

Penelope Carter. He’d heard she’d come back to town a few days ago, but he wasn’t expecting to see her like this.

The girl who’d blown his mind at summer camp with the hottest kiss of his life when he was a camp counselor and then abruptly bailed, leaving him to never hear from her again, was skating before him. She’d been a pretty girl back then. She’d grown into a gorgeous woman with curves in all the right places that had his full attention.

“Santa Claus is coming to town,” Penelope continued singing, pushing off one heel and lifting her hands in the air as if she were a figure skater and the music was real, not in her head.

Impressive, really. She skated better on heels than most people did on skates.

Darryl sighed and took in the crowd next to her with their cell phones out filming Penelope. She was going to regret this in the morning, especially if her little skit went viral. “All right,” he said, stepping forward. “Tuck those phones away. The show is over.”

A few grumbles later, the glow of the cell phones faded, and the crowd began to dissipate. Darryl turned back to Penelope, who sang, “You better watch out.” At least if the clip went viral, she could carry a note.

“Penelope,” he said, closing in on her, experiencing the same building heat he’d felt with her all those years ago.

He chuckled. Christ, ten years ago, Penelope had been a mix of sexy and cute. That hadn’t changed since he’d last seen her. He moved closer, not wanting the paperwork that came with an injury. Just like all those years ago, he couldn’t take his eyes off her. He’d been as enthralled with her when she was a teenager. The night he’d given her that hot kiss, she’d worn tiny shorts and her exposed belly had been his entire focus. Even now, in her tight sweater and black leggings, she stirred things inside him that hadn’t been stirred in a while.

The trouble with small towns, and being a cop, was Darryl knew everyone, and they knew that he and his ex-wife, Natalie, had divorced six months ago. Natalie had left town before the ink of the divorce papers had dried, and every well-meaning woman in town had been trying to help him “get over” his grief.

Now, Penelope had turned up, and he wondered if fate were giving him a chance to revisit his past. Unfortunately, it appeared that Penelope was in the habit of skirting the law. A law that Darryl had spent the past eight years enforcing. He’d put in his due and worked the night shifts since River Rock PD hired him. With a few cops retiring the next few months, there would be upcoming promotions, and the captain had already given Darryl the heads-up to bring his A game for the next while.

A promotion that he already fumbled once six months ago when Larry Michaels retired. The day Natalie had signed the divorce papers and left him, Darryl decided to spend the evening making friends with a bottle of whisky. He’d also made a complete ass out of himself at the local watering hole in town, Kinky Spurs. The next day, the promotion went to another cop.

Penelope sang another few lines, turning in a tight circle, and Darryl honestly doubted he could handle the likes of a grown-up Penelope Carter.

“Santa Claus—” Penelope screamed, as her heel caught on the edge of the fountain.

Darryl lurched forward when she began to fall. She landed with a yelp in his arms, and her wide green eyes connected with his. “All right?” he asked, ignoring the way her long, chocolate-colored hair felt damn soft against his hand.

Their gazes held for a beat. Then, she burst out laughing. A full-on belly laugh. One that Darryl never thought he’d ever experienced in his life.

“It’s you,” she finally said when she stopped laughing.

“It’s me,” he replied, ignoring the semi he was sporting from holding her so close. She smelled like sugar and vanilla, pure temptation.

“It’s you,” she repeated, snuggling her face into him like she belonged there. “Has anyone ever told you that you’re warm and comfy, just like a big teddy bear?”

“I’m warm because it’s freezing outside, and you’re wearing only a sweater.” He slowly placed her down, ensuring she was steady. When he let her go, he unzipped his coat and slid it over her shoulders. “And you are very drunk.”

She giggled, her eyes bright. “I know. I think it was the forth.” She held up her finger and hiccupped. “Nope, the fifth shot that did me in.” She pulled his jacket around her, inhaling a big deep breath then grinning at him. “Seriously, you still smell so damn yummy. How is that even possible?”

Yeah, and he was rock hard now. Focusing away from what his little brain wanted, he turned to the laughing crowd who had obviously returned when Penelope fell. “I said the show was over, folks,” he told them firmly. “Go home before anyone else gets in trouble.”

Darryl’s jaw clenched at the heat and promise in her voice before turning back to her. He found her heady gaze on him, lust burning through him. Or maybe it wasn’t lust but the alcohol making her eyes glossy. “Come on, you little troublemaker. It’s bedtime for you.”

“Your bed, I hope.” She grinned, pressing all those hot curves against him.

“Not tonight.” But maybe some night. He shook the thought from his head, knowing this woman was not the type of woman for him to play around with. She’d likely be more of a headache than what it was worth. With his possible upcoming promotion, he could not have a smudge on his image, and this stunt was enough to tell him that he needed to stay clear of her. He took her gently by the arm and led her to the car, opening the door for her.

“So, you really a cop?” she asked, flopping into the passenger seat. “Can I see your handcuffs?”

“Boo. How boring.” She laughed.

Hyper aware of her in every regard, he reached for the seat belt then clipped her in.

“See, Mr. Police Officer, you like getting all close to me,” she purred.

He turned his head after hearing the click, his mouth resting close enough to hers that all he needed to do was lean a little forward to claim those pouty lips. One little inch for him to find out if she still tasted as sweet as she smelled. “I don’t recall having said that I didn’t,” he told her honestly.

His answer obviously surprised her, as her eyes widened ever so slightly. He grinned to himself, intrigued by the possibility he could surprise a woman like Penelope Carter. From what he learned from her cousins over the years, she’d been traveling and bartending her way along the coast. She’d seen it all, done it all, and experienced everything. But maybe one thing she hadn’t seen was small-town life and a man like Darryl, who had promised himself to no longer keep quiet about what he wanted and be as honest and straightforward as possible. He’d compromised enough with his ex-wife, Natalie.

At Penelope’s silence, he arched an eyebrow. Yeah, he’d play this game, and he’d play it better than her. “Nothing else to add, Ms. Carter?” he asked.

“I see that.” He grabbed a plastic bag from this glove box and laid it out open on her lap. “If you’re going to be sick, use the bag.” He ensured her legs were all tucked in, his fingers tightening to linger there, and then he shut the door. He strode back to the driver’s side door, a cloud of his breath leading the way, when suddenly the lights and siren flicked on, electrifying the dark night. “Trouble, yeah, sugar, that’s you.” He hurried into the car, flicking off the siren when he dropped into the seat, then he turned the ignition on and mumbled, “Can’t seem to keep your hands to yourself, little menace. Police cars aren’t toys.” He turned to her. “Are you staying with your cousins?” His gaze hit those gorgeous legs again before moving up her body until he reached her face. She rested her head against the headrest, her face tilted toward him, her eyes shut. “Penelope.” A beat. “Penelope.”

“It’s not even a full moon,” he grumbled and sighed. He reached over and gave her a little shake. “Penelope.”

He stared at her then dropped his head back on his headrest, considering the best option now. He could call her cousins, the three Carter sisters who owned Three Chicks Brewery—a local craft brewery that was looking for its big break getting their locally famous beer, Foxy Diva distributed within North America—to find out where Penelope was staying. But somehow, that felt like the wrong move. The other choice was taking her to the station’s drunk tank, but that wasn’t quite right either.

“Let’s just hope your trouble doesn’t become my trouble,” he told her before putting the car in drive.