Dmitri and Presley—the scorching-hot couple who started it all in Claimed—return to save Club Sin in the exhilarating new short novel from Stacey Kennedy.

Dmitri Pratt is living out his dream. Not only does he own the ultimate playground, he’s found a special connection with his deliciously sexy sub, Presley Flynn, the woman who complements him in ways that go far beyond the bedroom. But when an anonymous blackmailer threatens to expose the elite, high-profile members of Club Sin in a notorious tabloid, Dmitri’s perfect world spirals out of control.

Before she met Dmitri, Presley never imagined she would find a Master who could deliver on all her hottest fantasies. Dmitri’s love and his sensual artistry surprise her every day, until he suddenly turns distant and cold. For the first time, Presley wonders where Dmitri’s heart truly lies: with her, or with Club Sin. As the life they’ve built together begins to crumble, Presley can only trust that Dmitri has what it takes—to defend what’s his, and win back the woman he cannot live without. 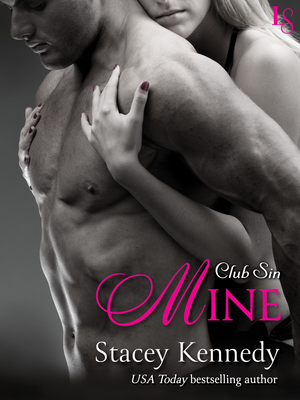 What happens in Vegas stays in Vegas.

People who visited Las Vegas were typically on the hunt for a wild weekend getaway. Others wanted to spend their nights in a casino. For Dmitri Pratt, Vegas was his home. He enjoyed what Vegas could offer those who visited the city, but he preferred saying, What happens in Club Sin stays in Club Sin.

Tonight he studied the club before him, feeling the sense of pride swelling. Club Sin members sat on the black leather couches situated around the room. They chatted among themselves or were lost in aftercare with their partners. The St. Andrew’s crosses, spanking benches, and bondage stations were all in use, with submissives being taken to a higher level of pleasure. Even the waft of sex, sweat, and feminine arousal brushing through the air brought Dmitri satisfaction.

Overwhelmed by the perfectness of the moment, he shifted his focus onto the woman who’d changed his life. He’d been an empty man during his twenties, searching for something he hadn’t known he was missing. Then, in his thirties, he’d met his submissive, Presley Flynn. Now his life had found an unexpected center.

He’d always worked toward a goal to make his life better—going to college, working at the casino, Aces, until he became its president—but he didn’t think his life could be any better than it was at the moment.

Presley waited silently, quietly asking her Dom to pay attention to her. She stood with her legs spread wide open by a spreader bar attached to her ankles. The spanking bench resting in front of her had a vibrating wand taped onto the long wooden pole, which pressed against her. Her hands were laced behind her head, and her body shook in the anticipation of where he’d take her next.

She’d come three times already tonight. He thought she’d climaxed enough without him. He closed the distance between them, and then he stroked the thin red welts on her shoulders and bottom. Those markings from his whip were his treat tonight.

He caressed the red lines, noting that she didn’t move when he touched her. The only sign she acknowledged his arrival was the hitching of her breath. Pride straightened his spine, warmth coursing through his veins. “Look at you, beautiful,” he murmured. “You’ve come so far, haven’t you?” 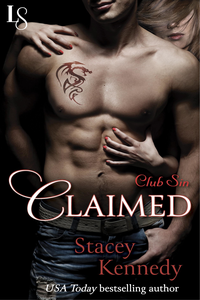 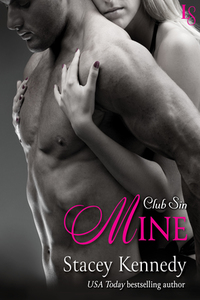