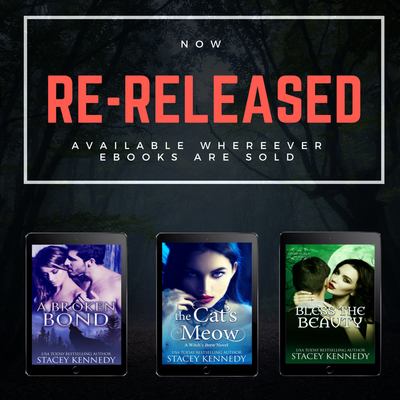 More about The Cat’s Meow…

When a magical presence is detected around a recent string of feline slayings, Libby, an enchantress, is determined to discover who is behind the odd deaths. Being a witch gifted by the Goddess to conjure spells won’t protect her from the sexy warlock the Coven sends to assist her. Kale weaves a spell more powerful than any she’s ever seen.

While having the muscle around proves to be useful in her investigation, fighting her growing attraction for Kale is worse than a hex, especially considering the secrets she knows he’s keeping. But when her spells turn up clues that point to something far more sinister than slaughtered cats, the elusive warlock becomes the least of her worries.

Libby finds herself in the midst of an uprising. She trusts no one and isn’t safe—not from the warlocks stirring up trouble. Not from the worrisome rebellion she can’t escape. And certainly not from Kale, who is weaving a very dangerous spell over her heart.

More about Bless The Beauty…

More about A Broken Bond…

Travis is a man on a mission!

RESTRAINED UNDER HIS DUTY: ON SALE!