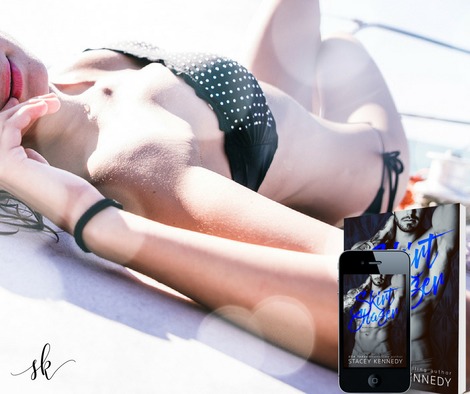 Dressed in a black bikini, she froze. Perhaps at the heat in his voice, at the dominance flooding him. Their time together was counting down, and he wouldn’t waste any of the minutes he had left. He moved to her, never taking his eyes off her, consumed by the lust raging in her eyes. She’d given him this look many times before now. A look so hot and needy he’d jerked his cock many times thinking of her this way. Before, he couldn’t do anything about it, always having to stay professional. Not anymore. Now, he could fully unleash himself, not having to worry about scaring her off, being too much man for her.

When he reached her, he scanned her face, loving the delicate pinkish hue to her cheeks and the way her lips parted, her breaths seeming harder to drag in. His cock twitched in his swim trunks, throbbing to be deep inside her.

“Be still,” he murmured, tangling his fingers into her wet hair, angling her head where he wanted it. He dropped his mouth against her neck and kissed from her shoulder to her ear, swirling his tongue, enjoying the way she wiggled her stomach eagerly against his dick. Her sweet, salty taste made him groan. He slid his hand over her bottom, squeezing the fleshy skin. She began moaning, softening beneath his touch, offering herself to him in all the ways he wanted her.

First chapter of SOME LIKE IT WICKED is now up! Release date: March 1st!