'TIL WE MEET AGAIN

Ethan Thomas has spent years alone―forever trapped between worlds. Once a soldier in the Civil War, he’s now a ghost bound to a chaise lounge that once belonged to him. He’s spent centuries lingering in Savannah, Georgia, waiting to be saved…

Cassandra Cole is an interior designer hired to restore an old Victorian home. As she begins to furnish the house, strange happenings erupt around her. She suspects the house is haunted. Determined to find out, Cassie sets out to discover who the ghost is, why she feels a connection to him, and what she has to do to free him. The answers will surprise her in ways she never imagined. 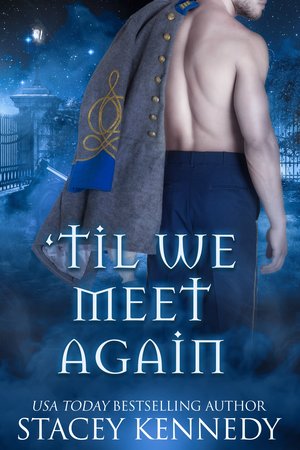 "'Til We Meet Again was hauntingly beautiful."
Goodreads Reviewer, Mel

For so many years, isolated days and nights, Ethan had been stuck in purgatory. He’d been shuffled from home to home, living among people who were at first strangers, but became constant companions over time. For close to ten years now he’d called Twilight Antiques in Savannah, Georgia, his home.

The shopkeeper, Mrs. Higgins, finished her Sunday morning routine of putting the new antiques out she obtained at auction. He’d never grown attached to her, because she had no connection to him. In her seventies, wrinkles canvassed her skin and Ethan had watched them grow deeper throughout the years. Beneath the sign of her age, soft pale blue eyes still held the beauty of a warm woman. Her silver hair, cut prim and proper, sat in tight curls atop her head, like women of her age nowadays. She might be elderly, however, she still took pride in her appearance.

The antiques held monetary value. To Mrs. Higgins, they were much more than that—a piece of history to be cherished.

Not an emotional attachment, a physical one. He couldn’t quite explain the reason his soul never crossed over after he died in the Civil War. Instead, he became bound to a chaise lounge he’d favored in the years he walked the earth. Without anyone to ask how or why, his lifeor deathhad become timeless.

The front door to the store chimed, drawing Ethan away from his thoughts as he lingered on the chaise. He sighed. Another customer to walk through the store and not give a second look at the chair he once loved, and still did.

In all his time at the shop, he’d yet to see anyone walk through those doors who caught his eye. On the rare occasions a younger woman came into the store, none though, appealed to him on a physical level.

If he stood, he’d tower over her delicate frame. Her long, chocolate brown hair stood out against her pale skin, except for the pinkish tinge on her cheeks and baby blue eyes that held a note of sweetness.

He might be a ghost, nevertheless, a man still resided in his soul, and she, a woman to behold. Her beauty mesmerized him.

“How can I help you, my dear?”  Mrs. Higgins asked in a rich southern accent.

“Have you heard of the Landsby home?” the woman asked.

Ethan could tell her heritage didn’t come from Savannah. She sounded American, yet not from around these parts.

The woman shook her head. “No, Mrs. Nash is the owner. I’m the interior designer she hired.”

“Oh, so you’re here to furnish the house?”

The woman nodded. “I’m not from around here—”

“Where are you from, dear?” Mrs. Higgins interrupted.

“New York.”  The woman smiled. “And the name is Cassandra ColeCassie.”

Ethan studied Cassie. All the dear comments seemed to displease her. What bothered her so?  She fascinated him and he hadn’t been interested in anything or anyone for some time. How intriguing.

“Well, Miss Cassie,” Mrs. Higgins went on. “What can I help you with today?”

Cassie glanced around the store before meeting Mrs. Higgins gaze again. “Mrs. Nash decided the theme for the Landsby house should reflect its history. She wants to restore the home to its original condition.”

“So. . . .” Cassie looked around at the store. “I have some shopping to do.”  She glanced back to Mrs. Higgins. “Do you haveor know ofa rental truck for hire to deliver what I purchase here today?”

“Mr. Pitts does deliveries for me. I’ll call him now and see he comes by with the truck soon to help you.”

She strode around the store, looking at the items spread out, and Ethan stayed with her. In fact, he drew in close and stood mere inches from Cassie watching a deep shudder run through her. “You’ve got a draft in here,” she called out to Mrs. Higgins.

Ethan leaned away from Cassie to let the warmth wash over her body again, yet continued to study her. She appeared so focused, so determined, and so adorable.

His cold soul lit up with a heat he’d long yearned for.