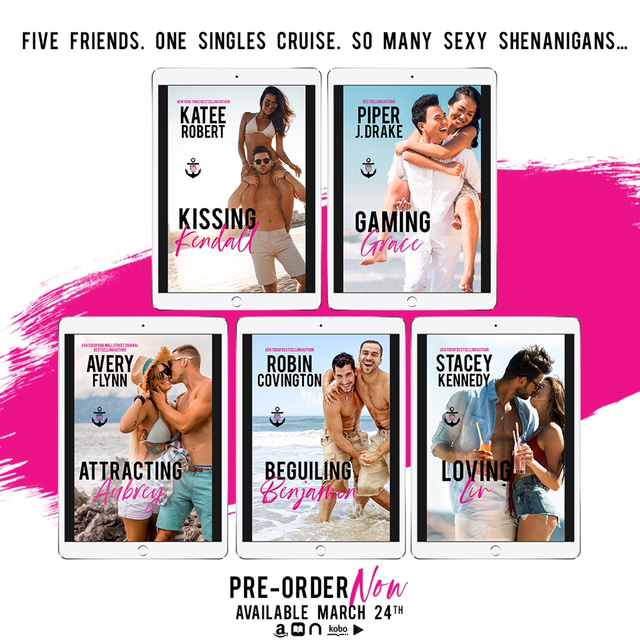 USA Today bestselling author Stacey Kennedy returns to the passion-filled world of Club Sin and Dirty Little Secrets with this novella featuring a slightly flawed Dom who has six days—and six very steamy nights—on a Caribbean cruise to convince an innocent woman from his past that maybe the best way for two broken people to find true love is to jump headfirst into the deep end of desire.

Liv Sloane needs a vacation. After her cheating ex broke her heart—and their engagement—Liv never fully recovered. In fact, she’s spent the past two years avoiding romance at all costs… with the exception of that sizzling one-night stand she can’t seem to forget. So when her friends from college suggest a reunion cruise, Liv knows a relaxing week of sun, sand, and beach reads is exactly what she needs to clear her mind. But when they board the ship, Liv is hit with two surprises. Her friends accidentally booked a singles cruise, and her one-night stand is waiting on deck.

Miles Schantz has spent the past three months thinking about Liv. As a Dom at one of the hottest sex clubs in Las Vegas, Miles has his pick of women… so why can’t he get Liv out of his head? When he receives an email asking him to join Liv on a cruise, he can’t believe his luck. But when he meets her on board—and she’s completely unaware of her “invitation”— Miles has to come up with a new plan. Six nights of no-strings-attached passion. Six nights of wild fantasies, sexy games, and forbidden adventures. Six nights to show Liv that she belongs with him…

Five friends. One singles cruise. So many sexy shenanigans. Be sure to check out all of the standalone Gone Wild books!
Kissing Kendall by Katee Robert
Gaming Grace by Piper J Drake
Attracting Aubrey by Avery Flynn
Beguiling Benjamin by Robin Covington
Loving Liv by Stacey Kennedy