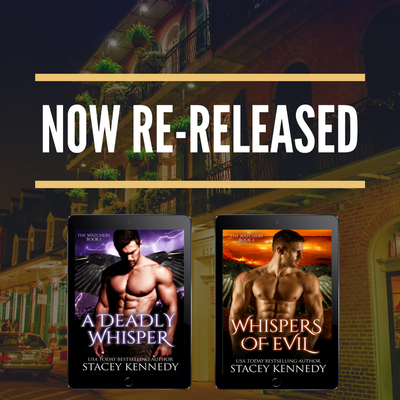 More about A Deadly Whisper…
Will destiny be enough to break her free of a lifetime of secrets?
Knox, the Seeker, has waited two hundred years for his Watcher and now he’s found her. Paxtyn, however, is unwilling to join him. The more he tries to prove himself, the more she pushes him away.
Paxtyn has spent a lifetime keeping her secret hidden from the world, but now she must confront these deadly visions head on. When a string of murders brings her to New Orleans, she must come to terms with her personal demons and lean on the one man she knows she shouldn’t—Knox. And when she finally opens up she’ll have to use her gift to communicate with the spirits that haunt them and follow their deadly trail…even if it means losing everything she thought she never wanted.
More about Whispers of Evil…
Nayeli has been locked away, hidden from the world in a mental institution, all due to the whispers of evil which have corrupted her mind. Unbeknownst to her, the voices that have plagued her are a gift given to only one kind―Watchers.
Griffin, her Seeker, is about to break this cage of imprisonment woven around her and give her a new chance at life. But when a demon leaves the confines of Hell to create havoc in Louisiana, Griffin will have to hope his love for Nayeli free her wounded heart. Because with that she’ll succumb to the whispers that threaten to steal her soul.