In the Phoenix club, fantasies come to life, but he wants her for real, and he’ll do anything to prove it in this deliciously sexy romance from USA Today bestselling author Stacey Kennedy.

Lottie Harlow spends her days as a dog walker and her nights losing herself in wild fantasies at Phoenix, a members-only, voyeuristic sex club in New York City. Her anonymous existence is precisely planned. She must lay low, or risk facing the consequences of her family’s criminal past. She’s a ghost, and she likes it that way. But detective Hunt Walker is determined to uncover her secrets…

Hunt has always loved his nights at Phoenix, but they’re no longer enough. He wants more. He wants a relationship. He wants Lottie. He’s wanted her for years. The only problem? Lottie keeps him at a careful distance, never letting him get too close, ignoring the sizzling heat burning between them. He knows she’s intrigued by him, but she’s scared. He just can’t figure out why… But when enemies from her past come seeking revenge for her family’s deal gone wrong, Lottie’s secrets are revealed, and so is the explosive passion they’ve been fighting.

Soon, lust leads the way to love, but when Lottie’s brothers start threatening her, the line between right and wrong is blurred. Hunt becomes torn between his duty to his badge and his need to keep Lottie safe. But he’ll only get one chance to prove to Lottie that she’s worth fighting for… and that their love is worth the risk. 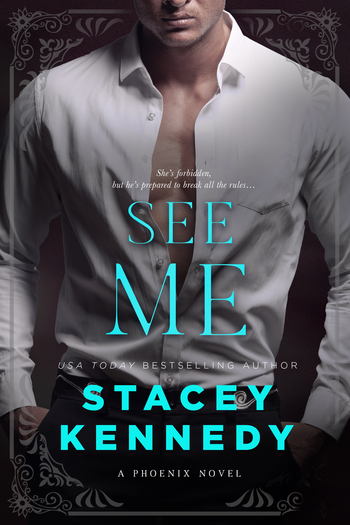 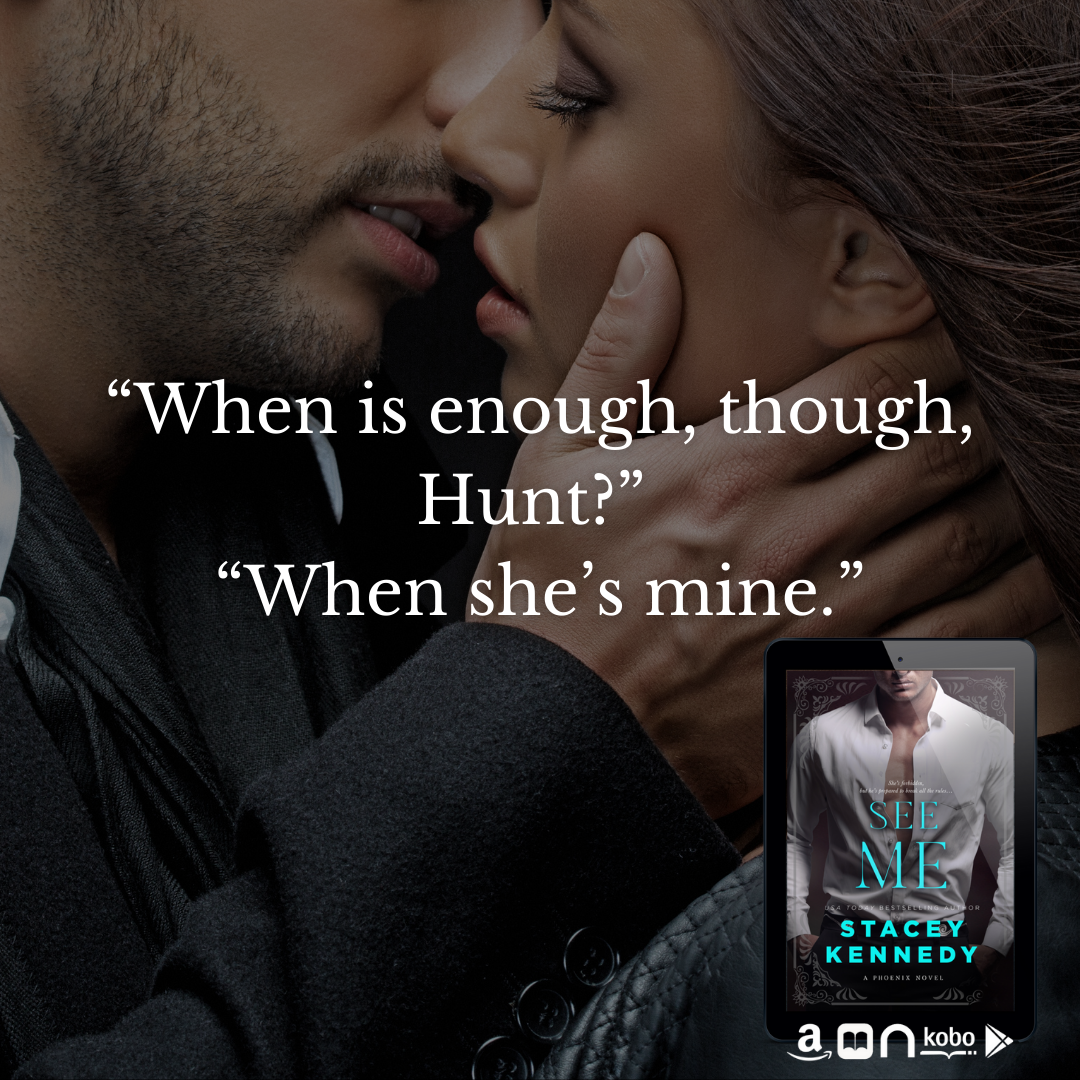 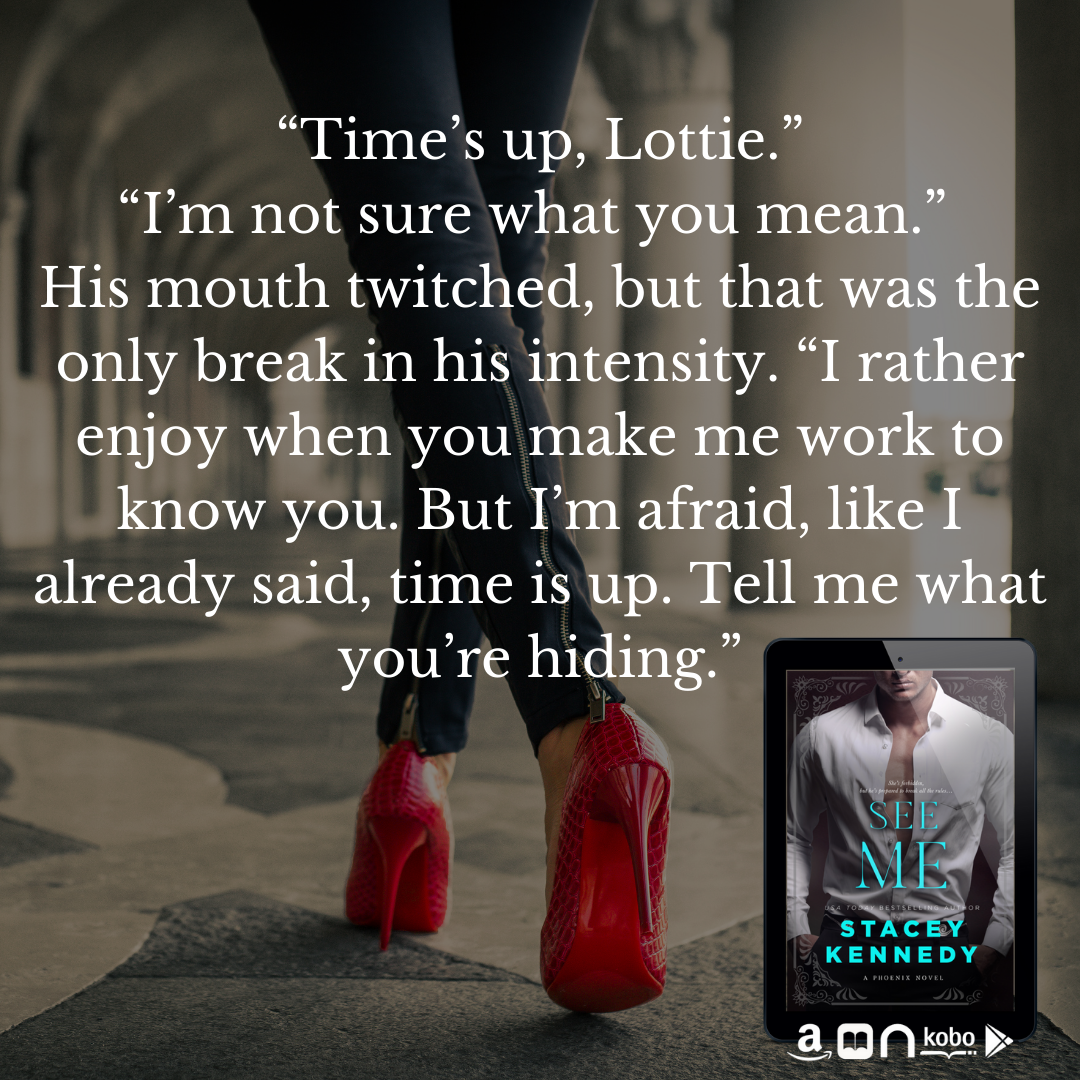 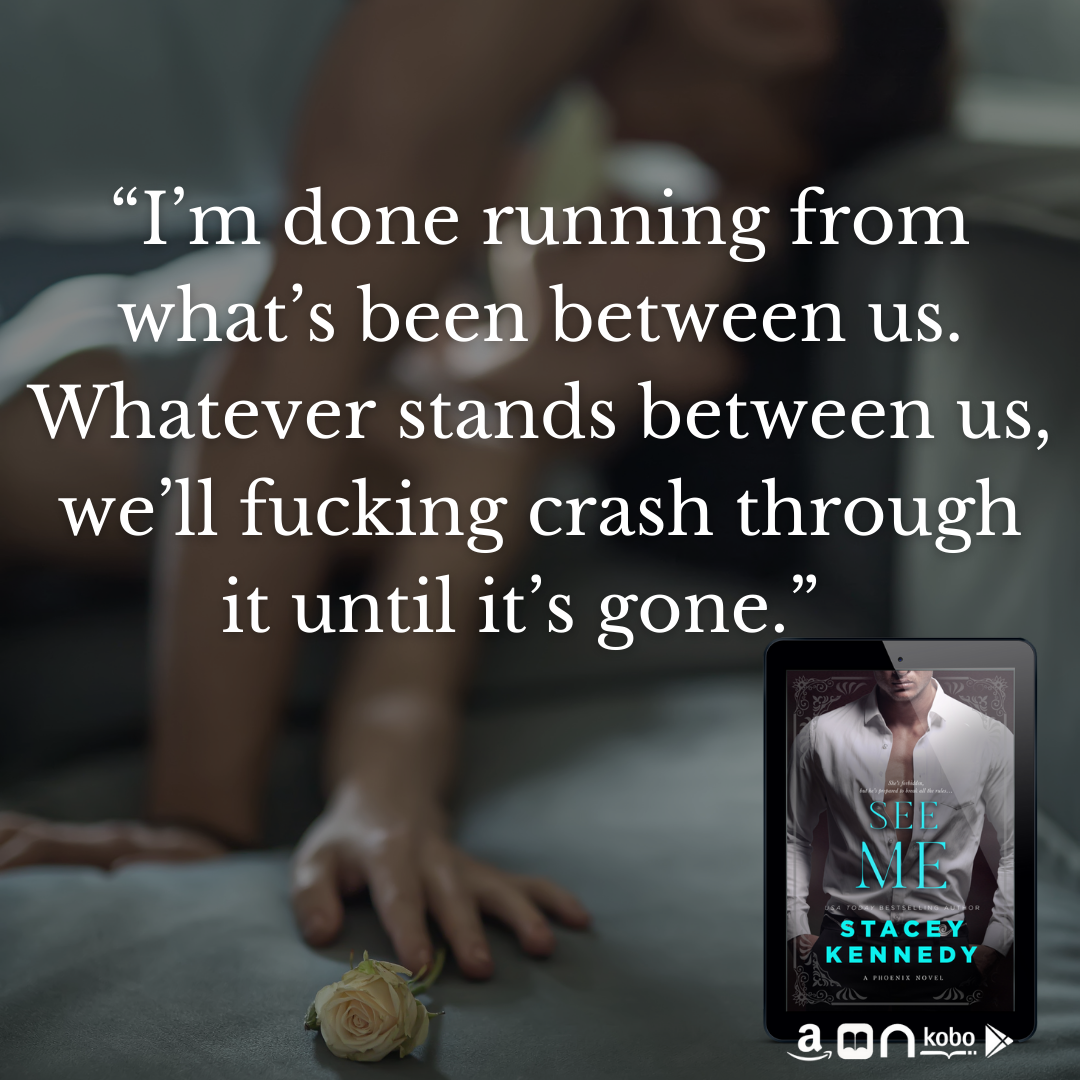 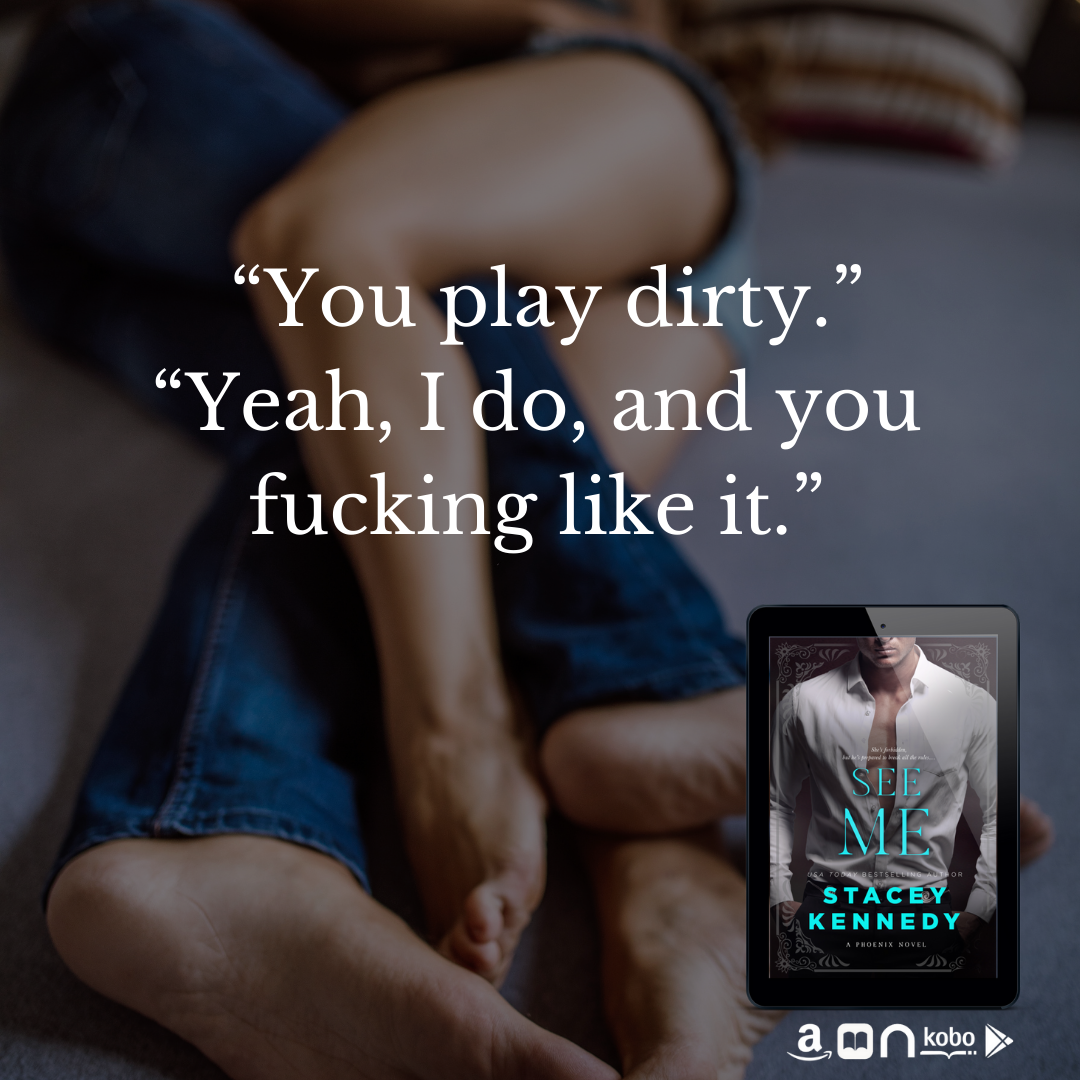 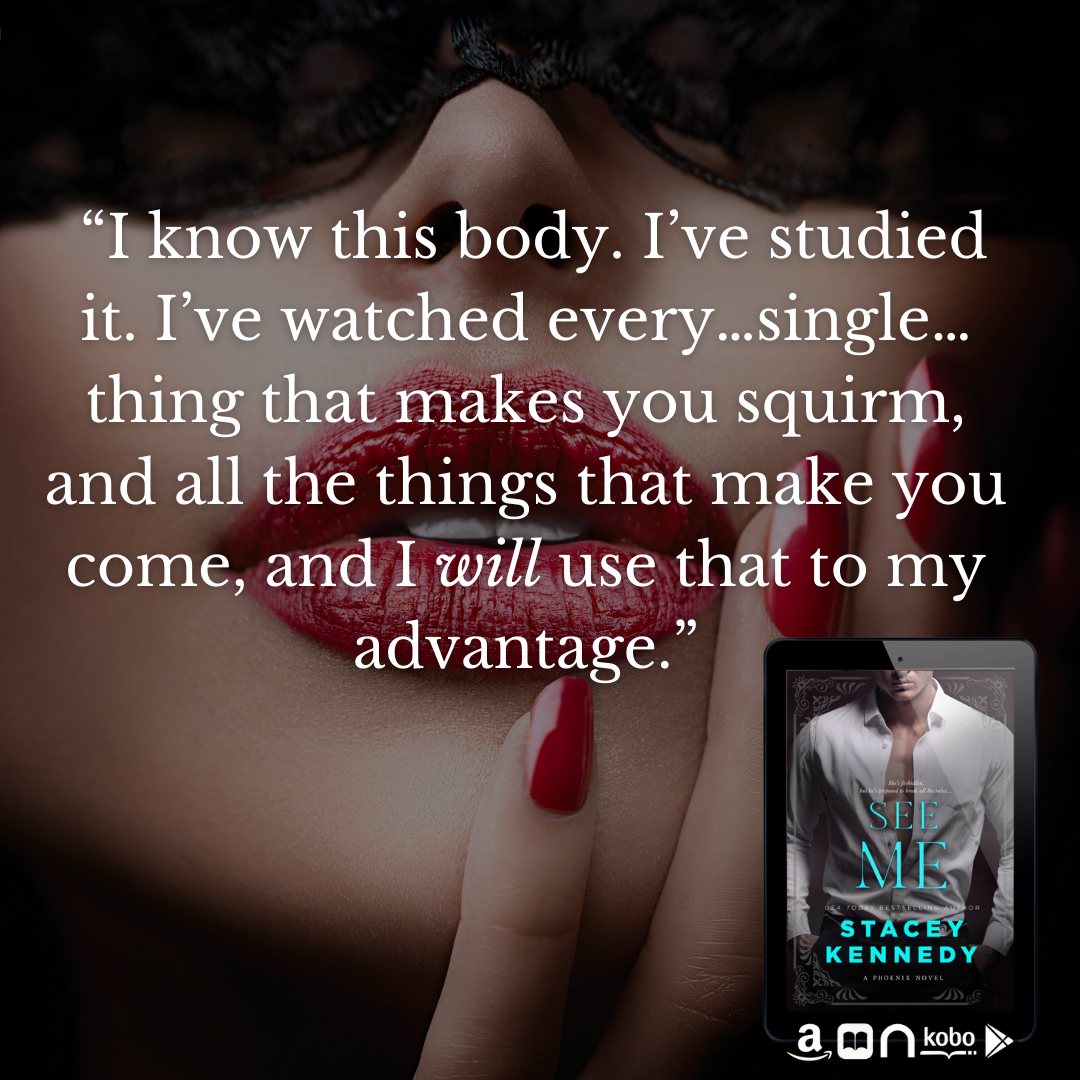 “One of the sexiest books of 2022 so far.”
Bookcase and Coffee

The squeeze against her wrists sent her willingly falling into the claim of the bindings. With every harsh breath that passed through her lips, she anticipated the hot pleasure awaiting her.

Candles flickered around the black chaise in the membership-only sex club in the heart of Manhattan, Phoenix, once a gentleman’s club, built in the 1920s. Phoenix’s owner, Rhys Harrington, turned the club into a cigar lounge, with a sex club hidden below. Tunnels that were once used to bootleg whiskey were used to access the sensual oasis. Every door was manned by retired Navy Seals and Special Ops soldiers. Money bought this level of secrecy for the members to indulge in their voyeuristic desires. Every member wore masks hiding their identities. No names were ever spoken inside the club. No identity ever shared.

The club only had only one rule—watch, but don’t touch.

The rule was only lifted a few times a month when Rhys allowed certain members to partake in shows. Though members were also given access to private rooms where, after a show, they could indulge in their partner or where singles could hook up.

Nearly every single member in this space belonged to New York City’s high society. The rich. The famous. But one member certainly didn’t belong, even if she’d become good at faking it.

Lottie shivered against the feel of the members’ simmering gazes as they roamed over her naked flesh. The power of those in the room. Each of those members paid a hefty price to request one sex show per month—a fantasy of their choosing.

Tonight, Lottie was the show. The member’s request had been simple: a demon captures an angel and burns her with pleasure.

And boy, did she burn.

She was meant to do the show with one of Phoenix’s security, Hawke, but that’s not who she saw now. Straddling a thick waist, she stared into a strong set of brown eyes beneath a silver demonic mask. Hunt. His tanned, muscular body flexing with his low groans made her tighten her core. Her long brown hair tickled against the rope, binding her wrists at her back. A gold angelic masquerade mask covered her face, giving her a way to hide, just how she liked it. Her anonymous existence was precisely planned. She must lie low, or risk facing the consequences of her past. She left her old identity behind her years ago, along with her entire family. She’d get shunned from the club for lying about who she really was, and once again, she’d have to start over from scratch.

Pleasure blinded her as a strong hand grasped her breast, the other moving to her hip, helping her gain speed. Her eyes fluttered shut, head tipped back as she moaned, relishing the loud groans that followed. Hot desire slithered through her at the pinching grip on her breast, squeezing tighter as Hunt released a demonic growl from low in his chest. The eerie rhythmic beats of the sensual music playing through the speakers set the tempo of her thrusts. She began rocking back and forth, harder and faster, as the music shifted to a loud humming, as if they were summoning something straight from hell with this union. She fell into the fantasy, moaning with every slam down on his massive cock, hardening even more when she rose, grinding her inner walls tight against him.

He leaned up and a nip of teeth burned her other nipple. She squeezed her fists tight behind her, an uncontrollable quiver overtaking her body. She slowed a moment, feeling him, experiencing every glide of his thick length, and heard his low groan of approval when her inner walls contracted against him.

Another bite of her nipple and she screamed, quaking against him, a shivering mess of need.

He thrust up hard from below, and she saw stars, riding him hard, ruthless through her orgasm.

Needing to see his passionate eyes, hot all for her, she dropped her chin.

A rough hand scraped against her face as Hunt grinned wickedly. “You see, my angel, being bad is so much fun.”

She flashed him an innocent smile, catching her breath. “Words spoken by a demon.”

His grin turned devilish. “A demon you love fucking you.” As if to prove his point, he lifted her by the hip, and she soaked his shaft from her climax. Unashamed, she moaned, as his fingers tangled into her hair. His growl tickled across her flesh as he began moving her this time.

Not how she wanted. How he wanted it.

Skin slapped against skin, as she bounced atop him. The pleasure causing tears of intensity to leak from her eyes as he angled her back, and somehow, he was even deeper.

His mouth found hers, and she met him kiss for kiss, the world narrowing onto the pleasure skyrocketing deep in her core. Every rough kiss, every dig of fingertips into her hips, only made her fall harder. Until her moans became an endless string of satisfaction, and his guttural roars sent her back over that edge for a second time. Pleasure fell like a warm blanket of ecstasy she never wanted to get out from under.

Until she heard the clapping.

When the high began fading, the light brown eyes resembling the color of whiskey shifted to an icy blue as the crowd continued clapping in appreciation. The messy golden-brown hair shifted to light blonde when the members began filing out of the room. She felt the tug of the rope on her wrists slowly releasing her. As the rope fell, so did her heart at the reminder that Hunt had not been part of the show tonight.

“Jesus, Lottie, you’re fucking incredible,” Hawke said, squeezing her sides as he lifted her off him.

“I’m only one half of the show,” Lottie reminded him, rising on shaky legs, pressing one hand on his strong, muscular thigh and the other on his metal prosthetic leg he received after an injury in the military.

A sly grin spread across Hawke’s handsome face as he winked. “Thanks, beautiful.” He leaned over, grabbed her robe and held it open for her.

She managed to stand upright on her jelly legs and slid into her robe, tying it at the waist, feeling like she always did after a show: satisfied, with a hint of longing. No one knew her secret—knew she thought of Hunt whenever she was with anyone in Phoenix.

“Want me to walk you out?” Hawke asked, fastening his robe.

“Thanks, but I’m all right.” Lottie smiled.

“Of course, I’m great; you just rocked my fucking world,” she said with a laugh.

He chuckled deeply in agreement. She’d done quite a few shows with Hawke. The club had a few regular men who participated in the shows for the members. Most worked security for Phoenix, but Lottie had been the only woman who Rhys had kept on full-time with the club. The members liked her shows.

Hawke dropped a quick kiss on her cheek and then blended in with the crowd leaving the circular room where most shows were held at Phoenix.

Lottie nearly followed, until she caught the stare that she’d fantasized had been watching her the entire time. Hunt wasn’t in the same spot when the show started, making her believe that he’d left for part of it. The sappy part of her heart wondered if it was for the same reason she had trouble watching him with others. She wanted only him. The stronger part of her heart told her to not even let herself think of Hunt. Fantasizing was enough, and she was already getting in way over her head.

If anyone was off limits, it was that sexy beast of a man.

He wore the badge. She’d avoided cops at all costs.

She forced a neutral expression as she headed for the door, where he stood, leaning against the wall, arms folded, a black mask only amplifying the chiseled lines of his jawline, the sculpted perfection of his kissable lips.

“About that date of ours?” Hunt asked with a slight curve to his mouth.

“There is no date,” Lottie told him, for the millionth time, striding past him. To date Hunt would mean unraveling the truth of her family and of her past. He’d learn all her secrets. The new life—new identity—she created would be at risk. The life she lived now, the one she was proud of, would no longer be possible. She had a dream—save enough from Phoenix shows to go to veterinary school and then start an animal clinic.

“That’s still your answer, huh?” he called after her, a hint of playfulness in his voice.

She froze, looked back over her shoulder, finding the sly smile still in place. She could have sworn he read straight through her. That he knew the only person she ever thought of when she set foot in Phoenix was him. That when she slid her hand between her thighs whenever she became overwhelmed with desire alone, she imagined his hands caressing her, his voice whispering in her ear, his cock penetrating her. She opened the door before she forgot why she needed to leave him behind. “My answer will always be no.”

His low, throaty chuckle simmered across her skin. Heat melted into her core as the door began shutting behind her, and he called, “Keep telling yourself that, sweetheart.”