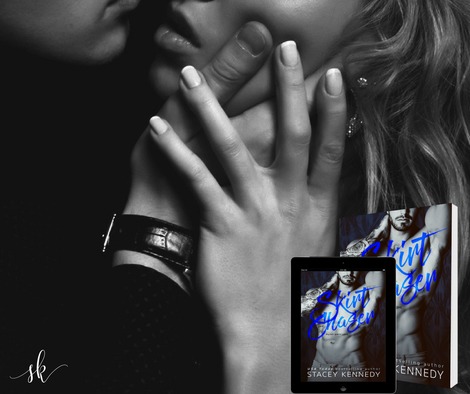 By the time he backed away, keeping his fingers tangled in her hair, and her head angled back so he could gaze into her eyes, she was breathless. He cupped her chin with his other hand, and she felt trapped in a hold oddly safe, changing her in unexpected ways. She didn’t know a touch could mean this much, but she was melting right down to her toes for him.

His voice lowered, eyes blazed red-hot. “Are you asking me to fuck you, Evie?”

He grinned, devilishly. “Have you forgotten already?”

His gaze fell to her lips. He brushed a thumb across her damp mouth in a gesture that spoke of his desire. “My game,” he stated. “My rules. Your surrender.” He stepped back, breaking her out of his spell. The coldness in the air was a shock to her system, when he added, “You can sleep in the spare bedroom, third door on the right. Set your alarm for five o’clock, we’re flying out at seven thirty.” Without another word, he left the room.

As Evie watched him disappear down the hallway, she finally got it. Likely, what every woman before her got.

He was lust. And control.

And she wanted more.